Here's a true bluebird: the 1999 one-shot OVA Arisa Good Luck. Last month, Tennouji, translator and proprietor of SakuraCircle, contacted me about doing this show. He had the DVD and a script but needed a team to do the back-end work. Would Orphan be interested? In a never-before-translated rare OVA starring the inimitable Horie Yui? You betcha! Tennouji sent over the ISO and his script, and off we went. After several viewings, maybe, just maybe, I understand what's supposed to be going on. I certainly understand why the OVA was lost in obscurity.

Nishizaka Arisa is an ordinary high school girl. She has a crush on ace basketball player Matsumoto Takayuki and decides to leave a confession note in his locker, asking him to meet her at the park after school. Her letter slips out of the locker into the briefcase of Hoshino Yuuki, delivery boy for a pizza shop named Pizza Shark. Little does she know (or care) that Pizza Shark is actually the local headquarters of an Evil Mastermind and his Minions™. The EM sends his minions to break up the date and kill Arisa in the process.

But little do they know that Arisa's siscon brother has been preparing for a confrontation with Evil. He has equipped Arisa with a magical(?) suit that turns her into a walking good luck charm. After Arisa transforms into a magi-girl, much to her embarrassment, she easily escapes every attack, knocking the Minions out in the process. 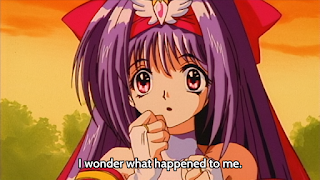 The EM is so impressed by her powers that he decides to kidnap Arisa's brother and extract the secret of the lucky suit. Arisa's brother is about to be dropped in the drink when Arisa, realizing that she'll never be able to get out of magi-girl outfit if her brother dies, shows up, ready for battle. Mayhem ensues, none of it believable, until Arisa's luck is victorious.

The seiyuu do their best with this nonsense:

The director, Kageyama Shigenori, also directed Bavi Stock I, Hi-Speed Jecy, and Yamato 2520, all Orphan releases, as well as The Humanoid, Windaria, Kakyuusei 2, Himawari!, and numerous h-animes (under an alias).

Tennouji translated and timed. I tweaked the timing, edited, and typeset. Nemesis, Rezo, and Topper3000 QCed. Rezo encoded from Tennouji's R2J ISO. The source is a mess of blended frames, and there's not much Rezo could do about it.

Arisa Good Luck is a trifle, but any trifle starring Horie Yue has some redeeming qualities. You can get it from the usual torrent site or from IRC bot Orphan|Arutha in channels #nibl or #news on irc.rizon.net.