The second DVD includes the last of the mythical stories from Genesis - the Tower of Babel - and the beginning of the history of the Patriarchs (Abraham, Isaac, and Jacob).
The story of the Patriarchs begins in Genesis 12, with God's command to Abram, as he was originally known, "Go forth..." (In Hebrew, "Lech lekha...") This passage is a turning point in the tone of the text, from mythical to historical, and is a watershed moment in the Old Testament. (It has been commemorated in a beautiful children's song by the late Debbie Friedman, Lechi Lach.) But the story of Abraham and Sarah is not without its controversies; for example, Sarah's laugh. When God informs Abraham that he and Sarah will have a son, he laughs. When the heavenly messengers repeat the same thing in Sarah's hearing, she too laughs. Centuries of censorious (male) commentary interpreted Abram's laughter as joy and Sarah's as disrespect, even though the Hebrew word used in both places is the same. Yet the messengers seem unperturbed by Sarah's laughter, even after she denies it, and tell the couple that their son will be named Yitzhak (Isaac), "the laughing one." 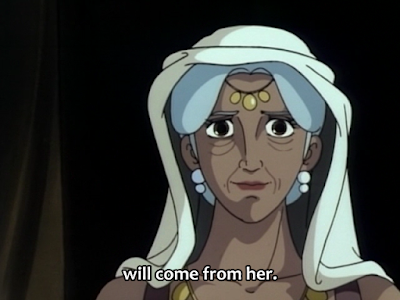 The episode order is a bit strange. Episode 6 really occurs in the middle of episode 5, when Abraham leaves the land of Haran and Isaac has not yet been born. It also omits the many seamy details included in the original text:

In the anime, the principal "sin" of Sodom and Gomorrah seems to be that the women wear fox furs.  Well, the series was intended for all ages.


The new additions to the voice cast were veteran seiyuu.

The Orphan staff credits are the same. Skr did the heavy lifting: translation, timing, typesetting, and encoding. I edited. Nemesis and Topper3000 QCed.

You can get this batch of episodes from the usual torrent site or from IRC bot Orphan|Arutha in channels #nibl or #news on irc.rizon.net.