As I've noted before, the Japanese are fascinated with chaotic historical eras, like their own Warring States and Bakumatsu periods, and China's Three Kingdoms era. The latter was the subject of a 60-volume manga epic, Sangokushi, by Yokuyama Mitsutera, which has been animated at least four times:
Orphan will be releasing the first English-subtitled version of all three theatrical movies.

The first movie is Sangokushi Daiichibu Eiyuu-tachi no Yoake (Sangokushi: Dawn of the Heroes), released in 1992. It starts further back in time than the Sangokushi OVAs, with the Yellow Turban rebellion that initiated the downfall of the ruling Han dynasty. At the start of the story, both Liu Bei, its eventual protagonist, and Cao Cao, its eventual antagonist, are minor players. Liu Bei is striving to find a way to bring order to a chaotic world. As he puzzles he way toward the correct course of action, he befriends two powerful warriors, Zhang Fei and Guan Yu. Together, they take the Oath of the Peach Garden, to live and die together as warriors for justice. Meanwhile, Cao Cao is pondering how to fulfill his destiny as "a hero in a chaotic world or a villain in a peaceful one." 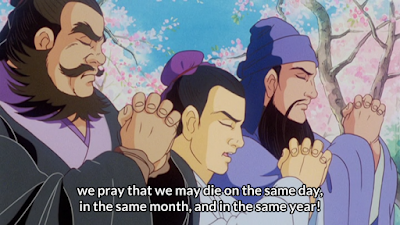 Initially, power seems to belong to usurping warlord Dong Zhuo and his right-hand man, the hero Lu Bu. But the two soon fall out over a woman, and the resulting power vacuum gives Cao Cao his chance. Even though Lu Bu is the stronger warrior, Cao Cao has the devil's own luck on the battlefield. Liu Bei tries to stick to the right course, but he is just a minor piece on the giant chessboard of China's warring states. War rages up and down the country, with inconclusive result, thus setting the stage for the next two movies in the series.

The voice cast includes:
The director, Katsumata Tomoharu, is a veteran with many credits to his name, including Danguard Ace, Captain Future, the first few Yamato movies, Rokudenashi Blues, Odin, and the Saint Seiya Hades OVAs.

This project is Iri's brainchild, and he translated all three movies. They are inordinately long; the dialog in each movie is equivalent to six or seven anime TV episodes. It is also quite formal and deliberately a bit stilted, to convey the formulaic nature of many of the interchanges. Sunachan, who speaks Chinese as well as Japanese, checked the names and the signs. Yogicat went into overdrive to do the timing. I edited and typeset. The typesetting was a PITA, because of the large number of maps that are overlaid across action scenes and scale against the background. BeeBee and Topper3000 did QC. M74 encoded from a Japanese DVD.

So if you're ready for another plunge into the complex world of the Three Kingdoms, this time with a much more detailed and complex story line, you can get Sangokushi Daiichibu Eiyuu-tachi no Yoake on the usual torrent site or from IRC bot Orphan|Arutha in channels #nibl or #news on irc.rizon.net.
Posted by Collectr at 6:39 PM