Back in the airly days (2013), Orphan did a number of projects based on the -uusei eroge franchise, starting with a three episode OVA from the turn of the century, Sotsugyousei (The Graduate). By itself, Sotsugyousei didn't make much sense, so that led us to translate its parent series, Doukyuusei 2; and then on to Doukyuusei Climax, Kakyuusei (1995), and Tenkousei. At that point, I fully expected never to see these shows again.

When Orphan released the show, I didn't even attempt a synopsis, because the events and characters were so closely intertwined with the parent series, Doukyuusei 2. For those disinclined to watch or rewatch all twelve episodes of that show, here is a crib for the characters:

Sanshirou returns to his hometown on break and promptly falls into the middle of all these relationships and crosscurrents. His interactions with the girls, the girls' interactions with each other, and Yui's propensity for getting herself and other girls into compromising positions, provide frequent excuses for boob, butt, and panty shots, but there is no actual sex. 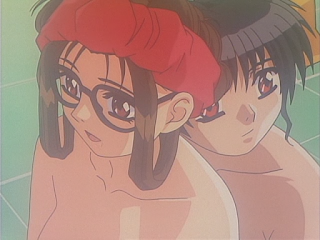 Eventually, Sanshirou gets together with Miyuki and true love triumphs, as in all the other -uusei series.

Sotsugyousei has basically the same cast as Doukyuusei 2:

The director, Sakai Akio, mostly did character design and animation.

The original Sotsugyousei script bristles with names from Orphan's past. ElyasRay translated. laalg checked the scripts. I timed, edited, and typeset. CP and Saji did QC. The raws came off the Internet. For this release, Yogicat and I retimed the scripts. I updated the styling and typesetting. Rezo encoded from ProxyMan's R2Js and did a release check. The DVDs are a mess of blended frames and bleeds, but this encode looks cleaner than the original DivX5 raws.

So here's an improved version of Sotsugyousei, but the improvement is relative to an atrocious-looking original. The show is still very hackneyed, but it has lots of eye candy and no sex, if that's the mix you're looking for. You can get the show from the usual torrent site or from IRC bot Orphan|Arutha in channels #nibl or #news on irc.rizon.net.