Yet another project that began in the deep, dark past. Bakumatsu no Spasibo (Gratitude in the Bakumatsu) is a 1997 movie about Russian admiral Yevfimy Vasilyevich Putyatin's second voyage to Japan in 1854-55. During that mission, he negotiated the Treaty of Shimoda, which opened relations between Japan and Russia. From what I can tell, M74 encoded a rip of the VHS tape in the summer of 2017. Moho Kareshi delivered an initial script in 2018. In early 2019, glenn tinkered with the timing and the translation, and then ninjacloud retimed it. And there the project sat until this summer, when our good friends at Inka suggested a joint project to finish up the film. Off we went, and here is the result.

Putyatin's mission was a Russian foreign policy initiative intended to blunt the impact of Commodore Matthew Perry's American expedition to open Japan. Putyatin first reached Japan in 1853. However, the arrival of the Americans and their gunboat diplomacy had thrown the Japanese government (the Shogunate) into an uproar, and Putyatin was unable to conclude a treaty. He returned in 1854, anchoring at Shimoda, to begin serious negotiations. 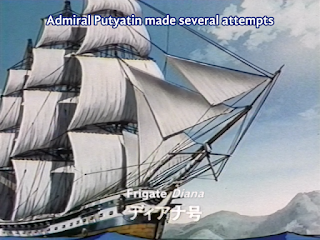 However, the massive Ansei Tokai earthquake led to a a huge tsunami that sank most of Putyatin's ships. The Diana was spun around 42 times and badly damaged. It sank as it sailed to Heda for repairs, stranding Putyatin and his crew in Japan. Despite the setbacks, Putyatin continued negotiating and brought the talks to a successful conclusion. In addition, his crew worked with Japanese shipwrights to build a ship capable of taking him and his crew home.

Like other historical films, Bakumatsu no Spasibo is an earnest affair, with lots of scenes of serious men talking in small rooms, interspersed with interactions between the curious Russians and the flabbergasted Japanese populace. The movie has a blizzard of characters on both the Japanese and Russian side; most have only a few lines and then vanish. The exceptions are Admiral Putyatin himself; his Japanese negotiating partner, Kawaji Toshiakira; the master shipbuilder who constructs the replacement ship, Oaki Kakichi; and his son, Oaki Kikusaburou (Kiku), who acts as the audience surrogate for the events surrounding the foreigners' arrival. There is some manufactured tension, but by and large, the movie tries to demonstrate that the relationship between Russia and Japan was harmonious from the get-go. Of course, this viewpoint ignores the fact that Russia and Japan fought four wars during the next hundred years, and that Japan disputes Russia's possession of the Kurile Islands to this day, citing the Treaty of Shimoda.

The script is a treasure-trove of research on events and people; here are a few of the more interesting points:

As I mentioned in the opening paragraph, the credits for Bakumatsu no Spasibo are quite tangled. As best I can tell, Yume (Inka) did the translation, building on Moho Kareshi's (freelance) original script. glenn (freelance) did the first pass at timing, while ninjacloud (Orphan) did all the subsequent passes. TougeWolf (Inka) translation checked, did an initial edit, and release checked. I did the final edit, typesetting, and a second release check. Nemesis (Orphan), Uchuu (Orphan), and VigorousJammer (both) QCed. M74 (Orphan) encoded from a VHS rip by Intrepid (Orphan). So it's a joint Orphan and Inka release.

The tape itself was protected with Macrovision (curses!), so it couldn't be ripped on Intrepid's non-compressing setup. As a result, there are a lot of blended frames. There has never been a laserdisc or digital release.

So here at last is Bakumatsu no Spasibo, intended as a testament to a Russo-Japanese amity that never existed and still doesn't. You can get the release from the usual torrent site or from IRC bot Orphan|Arutha in channels #nibl or #news on irc.rizon.net.