Here's a wonderful example of the "wide-screen baroque" school of anime science fiction, the 1987 movie MAPS: Densetsu no Samayoeru Seijin-tachi (Maps: The Legendary Nomad Star Tribe), or just Maps for short. This first English release of the movie is a joint project between Inka-Subs and Orphan Fansubs.

At the outset, 16-year-old Tokishima Gen is over his head in a high-school soccer game, cheered on (or egged on) by his not-quite-girlfriend Kimizuki Hoshimi. Suddenly, a ginormous space ship shaped like a flying female figure (or a vintage Rolls Royce hood ornament) appears. The ship beams Gen up, as Hoshimi clings to his leg - and other parts of his anatomy - in a desperate attempt to keep him on the ground. Inside the ship, its statuesque captain, Lipmira Gweiss, informs Hoshimi that he is the legendary Mapman - a living map to a treasure, the Surging Light, hidden on Earth 200,000 years ago by the equally legendary Space Nomad Tribe.

While Gen is busy denying any knowledge of a map, Lipmira's ship is suddenly attacked by Captain Abe's "Space Patrol" cruiser. However, Abe is not part of the Space Patrol, but just another treasure seeker pursuing Mapman. After some hair-raising experiences, Lipmira, Gen, and Hoshimi turn the tables on Abe, who meekly accepts a role as cook on Lipmira's ship. Lipmira then reveals that she has deciphered the map, and the quartet set out to find the Surging Light. Of course, their quest will not be unopposed, because the Mythic Breed lurks in wait... 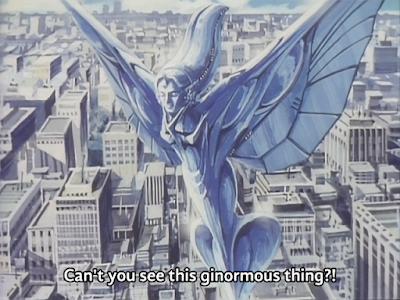 This bare synopsis cannot convey how delightfully goofy Maps is. Gen and Hoshimi are wonderfully mismatched. Captain Abe is basically a flake with a fantastically unrealistic view of his talents and prospects. There's one breathtaking (and often comic) escapade after another, leading to a galvanic final confrontation. And the conclusion is nicely open-ended, which is fitting, because the Maps manga, by Yuichi Hasegawa, filled 17 volumes.

The voice cast has many well-known veterans of 1980s anime, even in the smaller roles:

The director, Nishizawa Sususu, also helmed Hikaru no Go and Ouran Koukou Host Club, as well as the two most recent Nanatsu no Taizai series.

Maps was remade as a four-part OVA in 1994, and as is often the case, that version completely superseded the original. As a result, the 1987 movie was hard to find; it was only issued on analog media. For years, the standard raw was a VHS rip. The laserdisc rarely came up for sale and always at exorbitant prices. So this project happened through a series of fortuitous coincidences.

On one track, an old-anime fan who goes by the handle GouNoKen got in touch with Orphan about trying to do Maps. He bid on and won a used Japanese laserdisc of the movie and had it shipped to Intrepid, who ripped it on the Domesday Duplicator and encoded it. There it sat, for lack of a translator. On the other track, Yume in Inka Subs had started to translate the movie, using the available VHS raw. When TougeWolf of Inka began freelancing on Orphan projects, he brought the separate tracks together. Everyone rapidly agreed to a joint project, and this release is the result.

The staff credits reflect the interrelated work of the two groups:

A harmonious and fun project it has been.

I hope you can tell that I like Maps: Densetsu no Samayoeru Seijin-tachi quite a lot. It's playful and exciting, and it doesn't take itself too seriously. You can get the movie from the usual torrent site or from IRC bot Orphan|Arutha in channels #nibl or #news on irc.rizon.net.