It's has taken more than six years, but Evil-Saizen has finally finished the main sequence of Laughing Salesman. After 103 episodes, Moguro Fukuzou has satisfied (ensnared) his last customer (victim) and toddled off into the distance with a jaunty, "So long, folks! I know we'll meet again." I fear he's right. 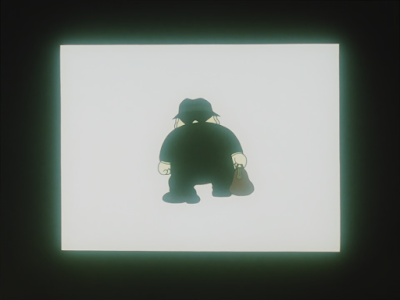 I wrote about Laughing Salesman more than two years ago, when all I had to depress me was the nightly news. Now, with a pandemic raging and my country ripped in half by political passions, I find Laughing Salesman more apropos - and more scary - than ever. The world is indeed filled with lonely men and women looking to have the gaps in their souls filled by someone, anyone, who will promise them their heart's desire. And as in the anime, the results are uniformly disastrous.

With the reworking of episodes 1-8 in HD, I've now edited all the episodes and specials and typeset most of them. kokujin-kun translation checked the early episodes and translated all the others; thus, he's put his translation imprint on the entire series. Eternal_Blizzard was the first timer; sangofe picked up the gauntlet for a long time; and ninjacloud timed the final group. QC has varied a lot but has included Calyrica, Skr, konnakude, Eternal_Blizzard, sangofe, pheon18, Mamo-chan, and at the start, our late colleague CP. BeeBee joined for the later episodes. Eternal_Blizzard encoded the initial DVD episodes; BakaProxy has encoded all the high-definition episodes.

Are we there yet? Not quite. Episodes 9-25 need to be redone in HD; the project could use an additional timer for that. And then there are around 19 more specials, which need the full treatment. The specials pose unique problems. They are typically double length, the typesetting of the opening tends to differ in each special, and the plots are even more intricate and wicked. Well, sufficient unto the day is the evil thereof. I'll burn that bridge when I come to it.

I'd like to thank all my colleagues on the project, who come not just from Live-eviL and Saizen but from across the "back-catalog kairetsu." They're a congenial and talented bunch to work with, and they have every reason to be proud of their efforts. Laughing Salesman is a long series; it's formulaic and best taken in small doses; but it is never, ever dull.